An Alternative Approach to State Management with Redux

Redux is often used in React.js Apps to manage global state. Typically the redux store follows a similiar shape as the app's database schema. E.g. for a table tasks, you typically have a corresponding tasksReducer.

With Redux, your application data now lives in two places: the frontend and the backend:

A lot of work when building Single Page Apps is spent on keeping these two systems in sync: When you add a new task object inside your app, you first add it to your redux store, so it's visible inside the UI, and you also make an API call to your Backend. When the Backend API call fails, you want to remove the record from your redux store again, otherwise your local state get's out of sync with the source of truth.

Keeping these two systems, backend and frontend, in sync is fundamentally hard as it’s dealing with distributed system problems.

Instead of manually writing this state management code for every table in our project, we can massively simplify the problem by rethinking our approach.

One direction where we can take inspiration from is Multi Page Apps. A multi page app typically is mucher simpler than a single page app. A multi page app is always rendered directly on the state of the SQL database. E.g. when building a simple PHP app, you fetch some data from the database and then render the HTML based on that data. There's no second system like redux. This is one reason that makes Multi page Apps a lot simpler to build.

Can we apply this principle to Single page apps as well?

Querying from the Frontend

First we need a way to describe queries. This could look like this:

With React this is typically solved using a Hook. Let's asume we've built a custom useQuery hook that magically refreshes whenever the database records that are returned by that hook are changed. It would look like this:

You can see that this structure closely follows the structure of the above PHP code.

The useQuery always returns the latest database state, and automatically refreshes when a record is changed in the database. With this we've now actually archived the same goal of consistency across the application state. The goal we've set out to solve initially with redux. Instead of rendering the view based on the redux store, we now render the view based on the actual database. Just like good old PHP does.

As long as the mutations write to the database, the database changes will be picked up by our useQuery automatically.

We've put the above API ideas of useQuery and query into work with Thin Backend. Thin provides you an easy way to keep your backend just a thin layer over your data, while providing an interactive, rich experience in the frontend.

Thin Backend provides a useQuery hook that automatically subscribes to changes inside a Postgres table and notifies any useQuery calls about those changes. To keep data secure and private for each user, we use Postgres Policies to only grant access if your policies say so.

Here's how a simple todo app looks like with these APIs:

You can run a live demo of that code here.

Once you start using the above APIs, you'll experience that it can greatly simplify managing database state in your frontend. At the end you might not even need redux anymore at all. 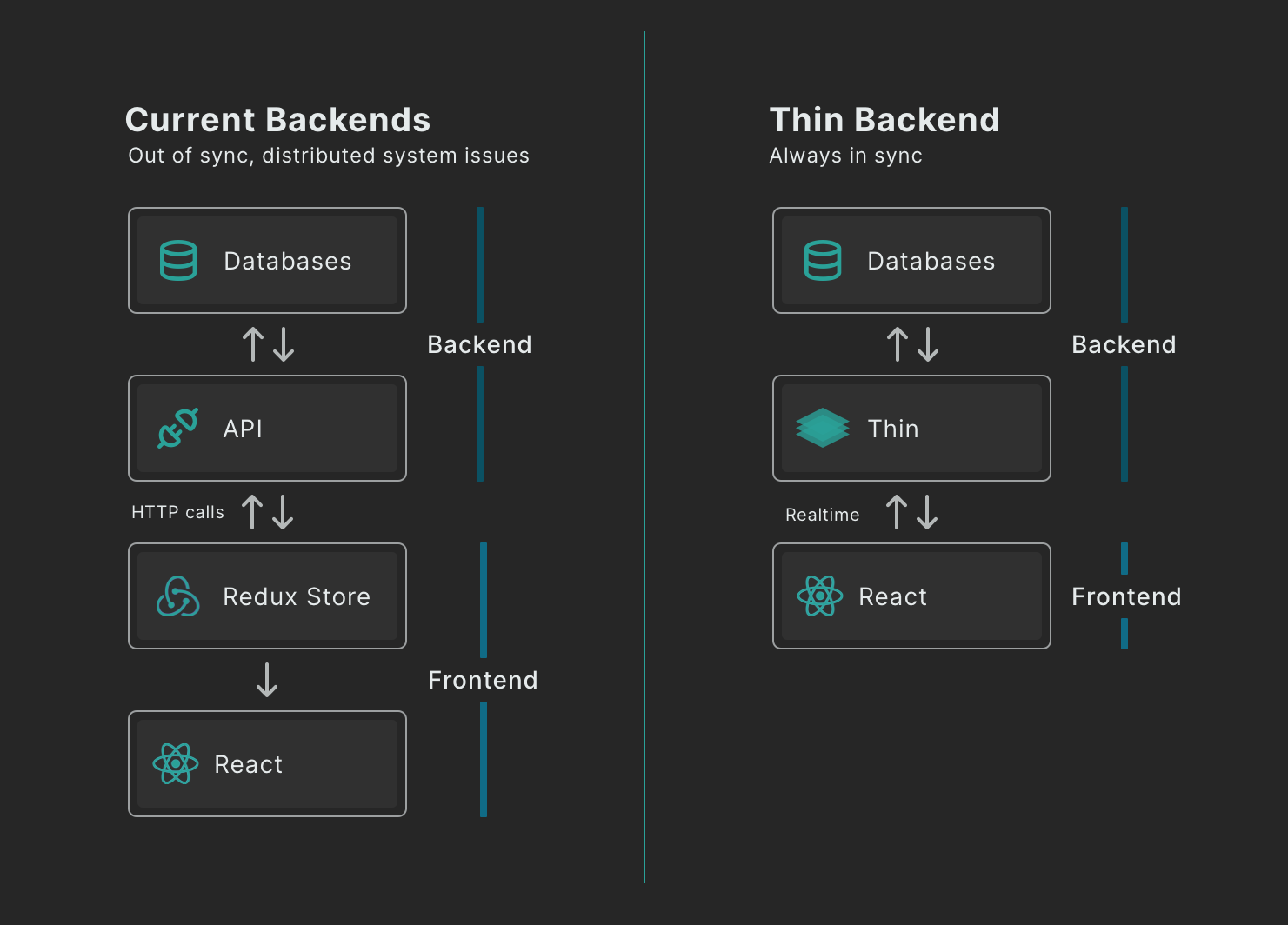 By rendering the view based on our actual database state instead of a second system like redux, we can radically simplify state management in modern single page frontends.

If you're curious, give it a try at thin.dev.

Here's what people who tried it out said about Thin:

Overall using thin-backend has been one of the most delightful experiences I've had making an SPA with a simple backend. The developer experience with the generated TypeScript types is particularly awesome!

From a developer point of view with Thin it feels like you can move directly from a schema to a user interface without having to spend a single line of code on network configuration or intermediate application layer logic.